Here on the Six of Swords, we see two people being rescued. A strange figure behind them paddles the couple to safety. The waters were rough before, but now they’re calm. It’s the golden hour… perhaps dusk or perhaps dawn… we don’t know for sure. Either way, it appears things are changing for the better. There’s a feeling of renewal, rest, and retreat. There’s a sense of being carried by grace or mystery, toward a new horizon.

Swords, in the tarot, are all about the air element. Air takes us up, up, up—into the realms of communication, thought, the third eye and crown chakras. Here is where we access visions and ideas, choices and decisions, as well as opinions and ego constructs. When the sword is pointed up, we send energy, prana, and life force up, blasting through all the delusions to arrive at truth, freedom, and peace. When the sword is pointed down, we are on guard or protecting our ego projections and destructive thought patterns.

But here, on the Six of Swords, we see that all the swords have been laid down. A moment of surrender has occurred! There is a pause, a reset happening. No need to fight, no need to defend, and no need to ascend upward. We are simply trusting something bigger to carry our swords, to carry us. 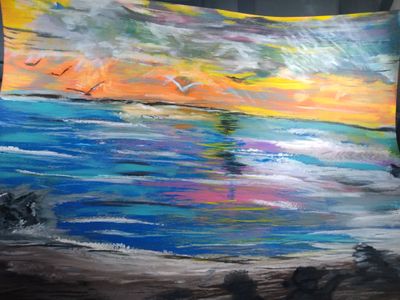 The Colors I Breathe